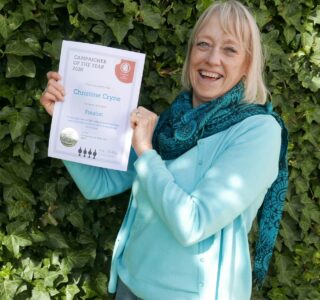 Guild member, Christine Cryne, received a surprise last week when the postman put an envelope through her door. Enclosed was a Certificate announcing that she had been a finalist in the Campaign for Real Ale’s (CAMRA) Campaigner of the Year Award.

Christine Cryne said “I was delighted to get this Award, which was given to me for all the online training and tastings I have been doing over this last year. These have been for CAMRA, of course, but also pubs, such as the Little Green Dragon in Enfield and breweries like Pitchfork during their online beer festival. It was a great way to get people engaged, particularly during the full lockdowns. I worked out I have spoken to over 1,300 people, the largest number of attendees was at CAMRA’s Sheffield Members’ Conference tasting , where we had almost 300 tasters. Online is a great way to reach lots more people but I am really looking forward to getting back to delivering tastings and training face to face’.

The overall winner in the competition was a friend of Christine’s called Paul Ainsworth, given for his work on saving pubs. He is an expert in planning legislation and he has personally helped many people save their local.  Christine said, “I didn’t mind losing to such a worthy winner who has done so much for communities”.