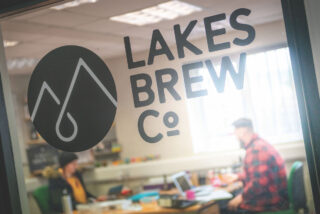 Adversity lit a flame within the Co-Founders of Lakes Brew Co in 2020 to create something for themselves, take control of their own futures and build a brewery that they are happy to be involved in. Counting themselves lucky to be able to carry on doing what they are passionate about, not only in brewing but in an area that feeds them inspiration on a daily basis. Creating innovative & progressive craft beers in the Lake District and holding themselves proud to be an inclusive, independent, woman co-owned business.

Michelle Gay, Co-Founder & Director said, It has taken lots of hard work to get to this point but it has also been a humbling first year of business for us, we have picked up several awards including a Gold national award for NE Session in can, which was up against some of the best beers in the country, a national branding award, Drinks Producer of the Year from Cumbria food awards and several medals in the regional awards of Society of independent brewers. To think if we hadn’t taken a leap of faith in ourselves we wouldn’t have been in this position today.

The end of July 2022 will mark the first year of brewing for the Lakes Brew Co Team. To celebrate they will be throwing a Tap Party at the onsite brewery pop up bar on 29th & 30th July, 12 – 9.30pm with street food, music and of course beers. Everyone is welcome to the all inclusive space, families, friends + furry fiends.

Co Founder and Head Brewer Matt Clarke has created three new beers as a way of marking the occasion. Said, we wanted to brew some extra special beers as we are hitting so many milestones this month, this time last year we took delivery of our brand new brew kit, employed two people and not forgetting brewed for the first time as Lakes Brew Co.

The three new beers are “Not Sorry”, a Peanut Butter and Chocolate Imperial Stout, “No Pav, No Party” a Raspberry, Peach and Passion Fruit Pavlova Sour and “Haze One Complete” a New England Hazy IPA, The first time you’ll be able to try the beers will be at the Brewery’s birthday party.