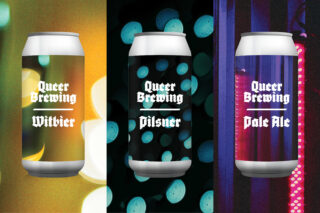 On February 5th 2021, Queer Brewing introduce three brand new, permanently available core-range beers, alongside a revamped visual identity with the aim to create a space for LGBTQI+ people in the world of craft beer.

Having spent the last 2 years brewing limited edition beers, in collaboration with some of the world’s most respected craft beer breweries, Queer Brewing are introducing three core beers brewed at Cloudwater Brew Co in Manchester, ranked the 2nd best brewery in the world 2017, by RateBeer.com’s users. These three beers will be available to buy through the Cloudwater website and, for the first time in Queer Brewing’s history, will be permanently available for pubs, bars, shops and venues to stock.

Queer Brewery’s core-range is first and foremost brewed to be delicious and accessible, both to craft beer newcomers, and knowledgable, veteran drinkers alike.

“We wanted to create a range of beers that is as exciting to someone who’s yet to fully experience the full scope of flavours available across beer’s spectrum, as it is to someone who’s loved craft beer for years. We wanted to brew beers that can bring people in through their approachability, and also open their minds through the beers’ complexity and character.” – Lily Waite, Queer Brewing Founder and Winner of Imbibe’s Personality of the Year 2020: Trailblazer of the Year.

With this in mind the core range comprises a Witbier (‘Flowers’), a Pale Ale (‘Existence As A Radical Act’) and a Pilsner (‘Tiny Dots’), styles which simultaneously encompass approachability and subtle complexity. The core range will sit alongside Queer Brewing’s continued collaborations.

“Our aim is to use beer as a platform and as a vehicle for social change, pushing for more representation, visibility, and community for LGBTQ+ people—both in the beer world and beyond. Queer Brewing is built around the values of collaboration, education, fundraising, and taking up space for LGBTQ+ people within the industry, centred around the mechanism of brewing delicious beers with a range of breweries around the world. These collaborations will continue to take up space and raise money for vital charities, whilst sitting alongside our approachable, accessible, and flavourful core range.” –  Lily Waite

Speaking of the decision to produce a core range of beers, Lily says:

“The past couple of years has seen Queer Brewing grow from a spark of an idea into a thriving and internationally-renowned project. We’ve worked with some of the best breweries in the beer world, as well as some incredible smaller ones, and have learned so much from everyone with whom we’ve collaborated. With the help of our friends at Cloudwater Brew Co, we saw that now was the right time to put together a solid, readily-available core range.

With a core range that we truly believe can appeal to anyone, regardless of beer-drinking status, we’re now looking beyond solely the craft beer market, to reach LGBTQ+ communities and venues who have, so far, long been overlooked by the beer world.”

Queer Brewing was chosen as the first participant in Cloudwater Brew Co’s ground-breaking Wayfinder initiative, which saw Lily win a grant of £10,000 and a 3-month term of support from the Cloudwater team, to work on a project that brings “lasting change to the craft beer industry.

“Working with Cloudwater as their first Wayfinder has been invaluable to the success of Queer Brewing. Their guidance, experience, and advice has allowed me to take Queer Brewing to the next level, and to leave behind our role solely as collaborator, and to set out as a brewery in our own right. After the 3 months with the team, I’m now confident in not only the beers that we’re producing, but the direction in which we’re headed and the impact that that will have.”

“When you design beer, you’re designing social experiences, most of these have so far been centred on a narrow demographic, informed by the white, straight men that predominantly make up the industry. The future is Lily and people like her, who can conceive experiences beyond the craft beer’s self imposed constraints, to offer consumers new takes and transform people’s expectations both within and outside the industry.”

The three new core beers will be available to trade outlets from Friday 29th January, and available directly to consumers from 9:00AM Friday 5th February and sold via the Cloudwater online shop: https://shop.cloudwaterbrew.co/collections/guest-beers/queer-brewing

Queer Brewing is a 100% queer owned, brewery, lead by artist and award-winning beer writer Lily Waite. Founded in early 2019 and inspired by the likes of Demark’s Hops Not Hate and People Like Us as well as London’s Craft Beer Cares festival, Queer Brewing has had a busy couple of years collaborating on over 30 beers with breweries in Denmark, Germany, Norway, and the USA, as well as plenty at home in the UK, and raising a projected £25,000 so far, for a whole host of incredible charities in the process.

Lily has been dubbed an “LGBTQ icon”, and has won a number of awards including Imbibe Magazine’s ‘Trailblazer of the year 2020’ and British Guild of Beer Writers’ Beer Writer Of The Year 2020. This year she was named one of the “most important voices in craft beer” by Hop Culture and topped Pellicle Magazine’s list of Trendsetters and Trailblazers for 2021.