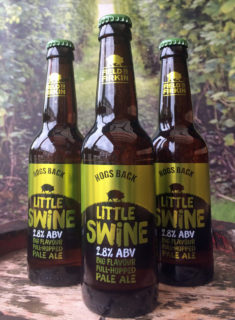 Surrey-based Hogs Back Brewery has secured a listing with Tesco for its Little Swine 2.8% beer, launched in pubs earlier this year. Bottles of the beer will be available in around 200 of the retailer’s stores from August.

Billed as a ‘Small Beer with a Big Flavour’, Little Swine meets consumer demand for low alcohol beers that fully deliver on flavour. Hogs Back initially launched Little Swine in February this year in keg. It is a dry-hopped, aromatic pale ale, brewed with a blend of aroma hops, including the citrussy Cascade grown in the Hogs Back hop garden and American Mosaic hops with complementary tropical notes. The beer is then dry hopped for additional aroma and flavour.

Tesco is the first major retailer to take Little Swine in bottles. Hogs Back has adapted the pump clip design to create an eye-catching bottle label which features the iconic Hogs Back hog, reduced in size to reflect the beer’s name. The neck label communicates Hogs Back’s ‘Field to Firkin in a Furlong’ positioning, based on the 200 yards distance from the hop garden to the brewhouse.

A 330ml bottle of Little Swine contains less than one unit of alcohol and will be included in Tesco’s ‘four for £6’ bottled beer offer.

Hogs Back Brewery managing director Rupert Thompson said: “We’re delighted to have secured this significant listing for Little Swine with Tesco, which takes our small beer to a big audience.

“We’re very proud of Little Swine, our first low-alcohol beer. Our brewing team have created a beer with all the taste of our full strength range, using additional hops and malts to compensate for the lower ABV. This beer is for drinkers who love the taste of beer but want to moderate the amount of alcohol units they drink, perhaps so they can enjoy a beer at lunchtime or a few in the evening and still keep a clear head for the afternoon or next day.

“Drinkers loved Little Swine on draught and we’re sure the bottled version will be just as popular.”

Hugo Murray, Buying Manager for Ale and Stout at Tesco said: “I am looking forward to Hogs Back Little Swine coming in to Tesco in August. Low alcohol beers are a new direction for the Surrey brewery and Little Swine is very on trend, a small beer packed with hops, juicy and crisp. Best enjoyed cold, it’s the perfect drink for summer.”

Little Swine was one of three new keg beers launched by Hogs Back at Craft Beer Rising this year, where they also unveiled a new design for their Hogstar lager. The new Hogstar design is being rolled out on bottles and cans over the summer.