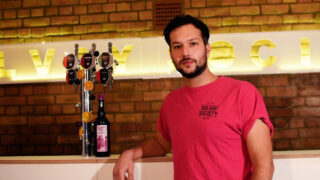 Solvay Society are 80% of the way to their stretch target of £10,000, after meeting their initial target within 24 hours.

They are looking to expand their Leytonstone taproom into a brewpub, bringing the brewery to Leytonstone and putting the tanks and taps together for the first time.

Meeting their reach target would allow them to add another tank to their soon to be relocated brewery.

They’re offering you the chance to pay it forward and get double your money behind the bar when aiding their expansion plans.

Since meeting their initial target they’ve also qualified for the Mayor Of London’s £5000 grant which shall help towards the new flooring and canning line in the new brewpub.

Founder, Head Brewer and Director Roman Hochuli said: “We had grand plans for 2020 that had included a move to a new site and, like many things, this was scuppered by Covid-19.

“This has made us even more determined to kick on and make new plans to find a new home for the brewery to the arch next door to our Leytonstone taproom. Allowing us to double our production, move canning in-house and crucially move our taps and tanks closer together.

In exchange for support, they’re giving the opportunity to double your money on the bar in their taproom, but also have some really great prizes that will be available just for backers.

Solvay Society’s rebrand went ahead with their beers making the leap from bottles to cans early in 2020. The feedback we’ve received has been resoundingly positive, even being featured in award-winning writer Pete Brown’s book ‘Beer By Design’.

In 2020, the year had also started off well with their Witbier x Session IPA, Superposition being named the SIBA champion wheat beer at Love Beer London in February 2020.

The pay it forward campaign will run from the 15th January – 26th February https://payitforward.london.gov.uk/solvaysociety

Belgian born, London brewed. Solvay Society was founded in 2014 brewing modern Belgian beer on the London-Essex border. Their founder takes inspiration from his Belgian heritage but has been a Londoner for over a decade. Roman uses his scientific background and PhD in Physics to make modern Belgian beer, focusing on the invention and the art of taste.