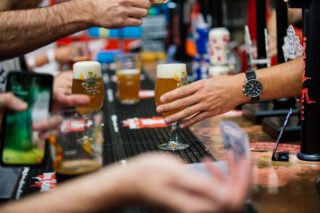 The Great British Beer Festival (GBBF) is making a triumphant return to London tomorrow, following an unplanned two-year hiatus due to COVID-19. Taking place at Olympia London from 2-6 August 2022, it’s return is a hugely positive sign for the industry. With nearly a thousand different cask ales, craft beers, real ciders, perries and wines under one roof, there’s plenty to celebrate.

Here’s what you can expect at this year’s festival:

A chance to sample a huge range of fantastic drinks

Cask beer is a rare find outside of the UK and this year we will be featuring the best of the best. We are welcoming back the cream of the crop with our favourite brewery bars such as Titanic, Adnams, Siren and Harvey’s. New brewers such as Brew 61, Black Storm, Iron Pier, Ossett, Saltaire and Three Tuns will also be on show. This is in addition to more than 350 breweries represented on the CAMRA bars.

In addition to sampling the best of the best from across the UK, visitors can also try American cask beer – a rarity in the US itself – at the ‘Bieres Sans Frontiers’ bars and a huge range of international beers. There will also be a vast range of craft beer, real ciders and perries, and the unveiling of a new “Gin & Fizz bar, featuring over 30 brewery gins.

Kicking off the perfect union – beer and rugby

If you’ll be joining us on Trade Day, make sure to head to the VIP area at 1pm to hear from ex-rugby players Tom May and Greg Bateman about the unique relationship between rugby and beer. May is the Brand Ambassador for Genius Brewing and Bateman has founded People’s Captain, a brewery which aims to end the stigma around mental health. The Q&A marks the launch of an exciting competition which will see festival visitors in with the chance of heading to the Rugby Union World Cup 2023 in France.

Exclusive codes will be scattered throughout the festival all week long, allowing visitors to enter a prize draw with the chance to win £3,000 worth of sports travel vouchers that can be used towards any rugby travel packages including the Six Nations and official travel packages to France – complete with hotels, flights and transfers and inclusions. You must be on the ground to win, so don’t miss out on this once-in-a-lifetime opportunity!

Discover more about your favourite drink

Head to the Discovery Bar throughout the week for a jam-packed schedule of informal brewer and cider maker led tastings and Q&A. These events are designed to help you learn more about the ingredients, techniques and people behind Britain’s best beers and ciders. Unlock the differences between West Coast and New England IPAs with Rock Leopard or join Aspach & Hobday to taste and compare their London Black porter in both cask and nitro keg. Every evening cider champions will take over the bar with a mouth-watering schedule of informal cider and perry tastings. To find out more, visit: https://gbbf.org.uk/whats-on/discovery-bar/

You can also sign up to one of our formal beer tastings throughout the week, run by beer experts who will help you learn more about the craft which goes into making Britain’s best beers. Discover some fool proof beer and cheese pairings, go on a tasting tour of London, or join an introduction to IPA.

For those who love reading about beer just as much as drinking it – you’re in luck. The latest CAMRA title World’s Greatest Beers is launching this week – just in time for International Beer Day on 5 August. Meet the authors in person on our Trade Day book launch and sample some of the beers that made the cut available on the festival grounds.

Featured beers from the book available at the festival include:

Full descriptions and copies of the title are available from the CAMRA press team on press@camra.org.uk

Celebrate the ‘best beer of tomorrow’

Due to the knock-on effects of the COVID pandemic on our regional heats for the Champion Beer of Britain competition last year, the winner will not be crowned until 2023. However, we are delighted to announce that we will be launching a NEW homebrew competition for this year’s festival.

In recognition that some of the best beers of the future are found among today’s homebrewers, CAMRA’s homebrew competition will be judged and announced on the trade day of GBBF. The overall winner will have the chance to commercially brew their beer with Brewhouse & Kitchen, with runner ups receiving fantastic prizes ranging from a year’s worth of beer to VIP tickets to next year’s festival. The winner will be announced on Trade Day at 4 pm on the centre stage.

A thank you to Thank Brew beer

Thank Brew – the special edition beer created to support Thank You Day and the Big Jubilee Lunch over the Jubilee Bank Holiday Weekend will be celebrated at the Great British Beer Festival on Tuesday August 2nd.

Thank Brew will announce that at least £10,000 was raised from Thank Brew sales for good causes, proceeds of which will be paid to its charity partners Together, Eden Project Communities and Reset, supporting Ukrainian refugees arriving in the UK.

CAMRA partnered with Thank Brew as part of its Summer of Pub campaign to encourage pub-going over the summer months. Its homebrew competition will feature a “thank brew” category prize, with the winner getting the chance to join Adnams for a special brew day. The winner and Thank Brew campaign update will be announced on Trade Day on the centre stage.

Named after the late beer writer Michael Jackson, this award is given to the best beer on the ‘Bieres Sans Frontiers’ bars, showcasing the very best American cask beer at the festival. Stay tuned for the announcement on Tuesday Trade Day and make sure to visit the bar to try the very best cask from the USA!

This year entertainment line-up is now live and will feature music and entertainment throughout the festival week. St Austell’s Tribute Ale – a festival partner – will be bringing visitors a sea-shanty band straight in from Cornwall called ‘Fisherman Friends’. A DJ will be handing out headphones for a silent disco on Wednesday evening, and music bands ranging from an AC/DC hard rock band to a String Quartet will be performing throughout the week.

Feature filming at the festival

Filming for the featured film ‘Mother’s Pride’ will be taking place at the Great British Beer Festival on Friday, 5 August, with producers on the grounds at Olympia throughout the day to get real footage of the festival. The film has been described as ‘a love letter’ to the British pub, with leading filmmakers taking inspiration from the near loss of their own community pubs. It features a grieving family whose lives are changed by brewing real ale and entering the Champion Beer of Britain Awards at the Great British Beer Festival.

The return of ‘Ask for Angela’ and ‘Ask for Clive’

The Great British Beer Festival will once again host the ‘Ask for Angela’ scheme and the ‘Ask for Clive’ campaign. Ask for Angela is a scheme aimed at keeping women safe in hospitality venues, and ‘Ask for Clive’ is a campaign that promotes LGBTQ+ inclusion and raises awareness of how to report hate crime in licensed venues and community spaces. Both encourage people to use a code-word to discreetly ask for help from bar staff.

If you’re ready to book your tickets, simply head over to https://gbbf.org.uk/. Tickets are now on sale – entry is £20 and visitors will receive a souvenir glass, programme and two half-pint tokens to kick off their day of beer tasting. VIP and corporate ticket packages are also available. We look forward to seeing you there!

If you are a member of the press and would like to join us on Trade Day, make sure to apply online by visiting http://gbbf.org.uk/tickets/press/

We will have a busy schedule of announcements throughout the week of the festival. To view all releases in advance for planning purposes, please visit https://www.dropbox.com/scl/fo/a1f2awnkdda7q5b4cou7d/h?dl=0&rlkey=09hn7qpuxvxbgmaf5w7uopzqy

To schedule an interview, please contact the press team on gbbfpublicityteam@camra.org.uk