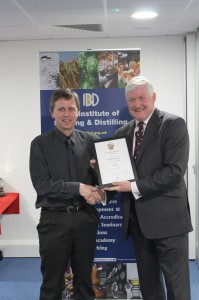 Worcestershire based hop grower S J Adams & Son has been named the overall winner of the British Hop Awards for 2014, as the results of the 71st Institute of Brewing & Distilling’s (IBD) annual competition were announced at an awards ceremony in London on the 23rd of January.

Taking the title ahead of 123 entries, the champion hop is a sample of Goldings, chosen for its rounded complexity encompassing delicate floral and citrus overtones with slightly spicy and earthy notes in the background.

Simon Jackson, Executive Director of the IBD, said, “The hop competition has grown over recent years in line with the increasing demand for British hops, driven in large part by the growth of craft brewing both in the UK and in international markets, where brewers are increasingly inspired by British beer styles and hop varieties.”

“This innovation in brewing at home and abroad is matched by that of British hop growers, who have rekindled interest in our traditional native varieties, and developed new ones at an astonishing speed. We were, once again, delighted by the quantity and quality of samples submitted, and grateful for the continued support of so many hop growers and growing groups for this long-standing competition.”

Judging of the competition took place in December, where the judging panel drew on their knowledge and experience to assess the hops on a number of criteria such as quality and intensity of aroma and trueness to variety type – before giving the top awards to the hops they would most want to use in brewing their own beers.

Judges commented that the hops submitted were of a high quality, and further noted that:

The judging process produces winners in five classes before the overall winner, which were:

The Institute of Brewing & Distilling (IBD) is the world’s leading professional body for people working in brewing and distilling.  The organisation originated as the “Laboratory Club” in 1886 and now has an international membership of over 4,500 people based in over 50 countries world-wide.www.ibd.org.uk/